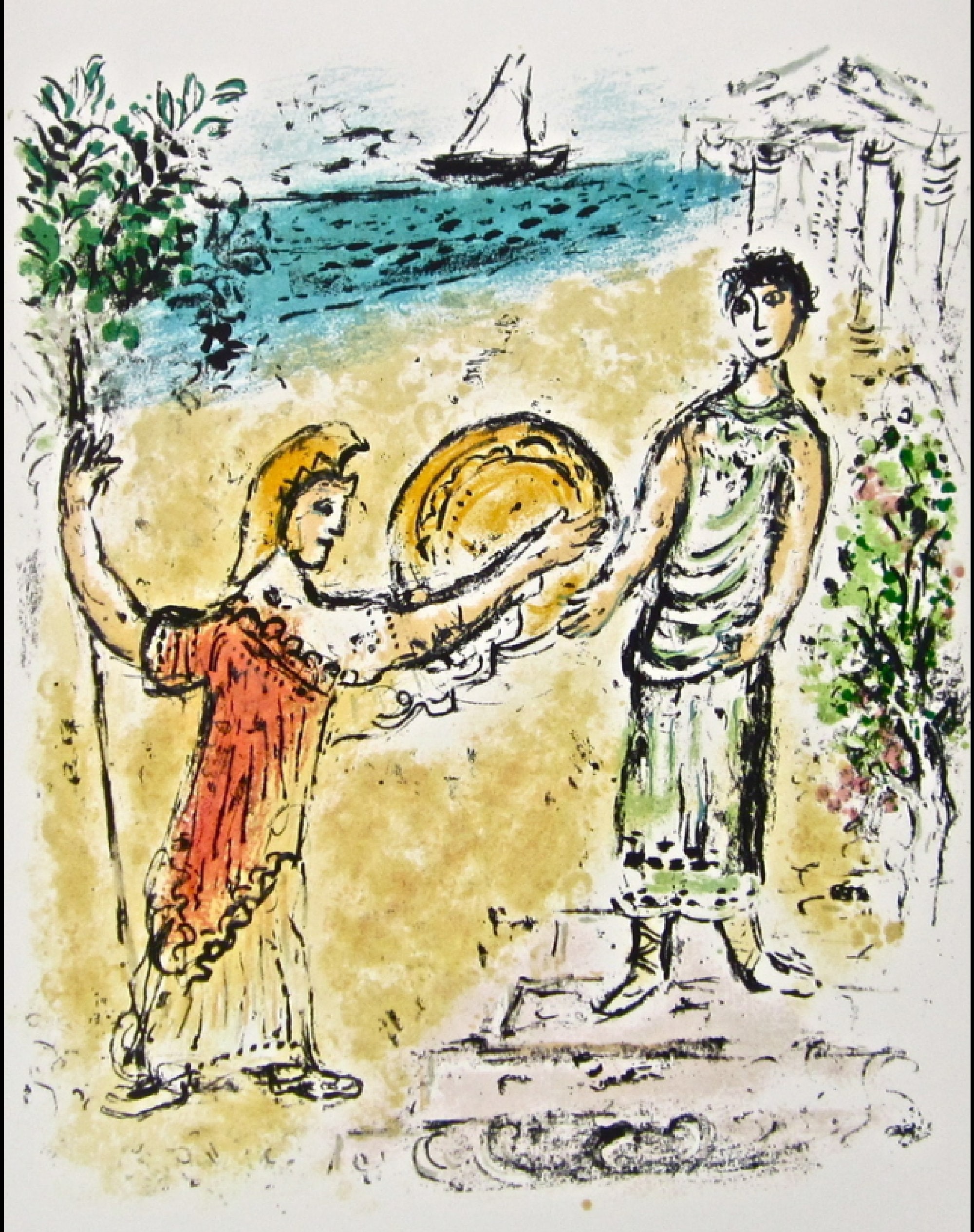 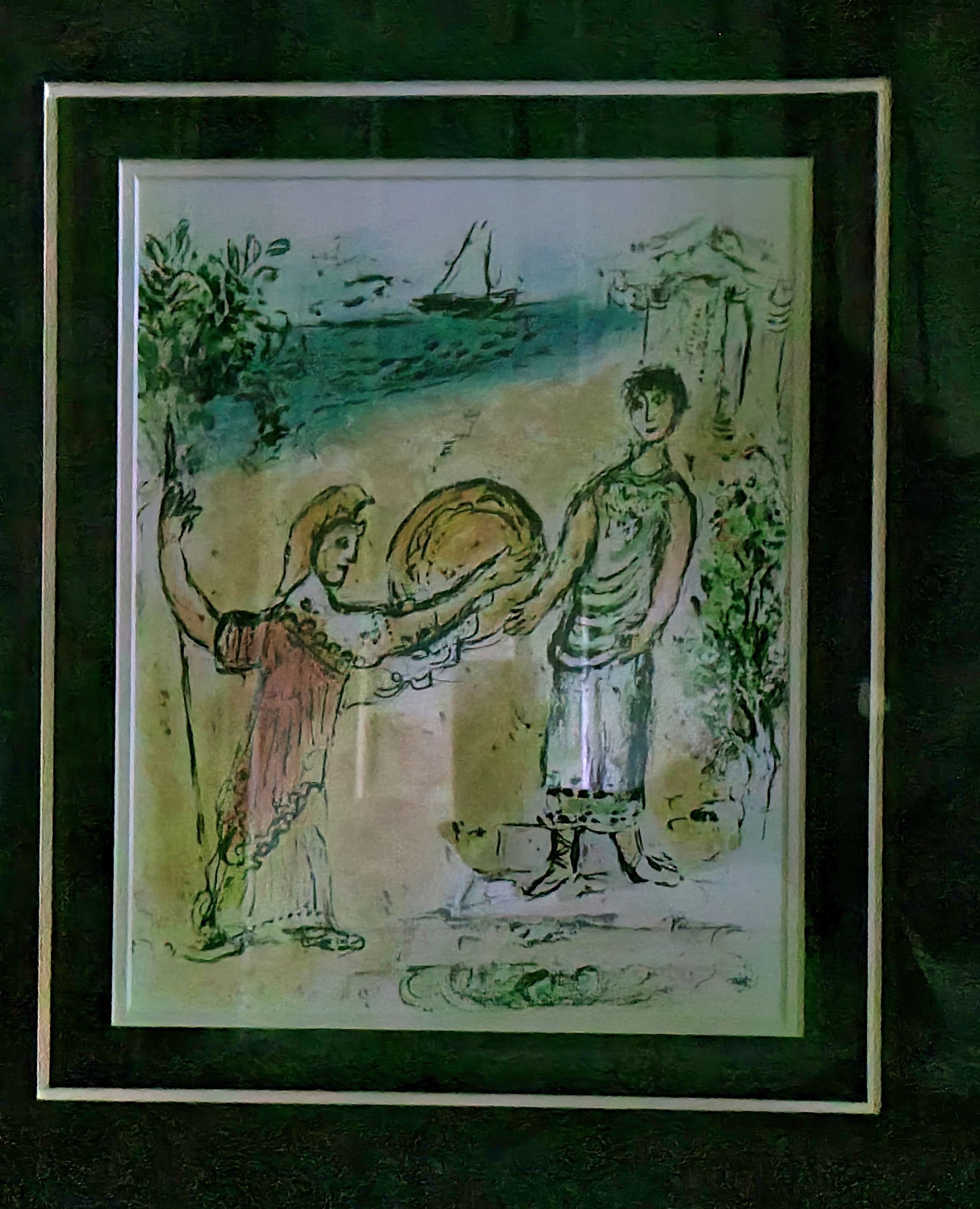 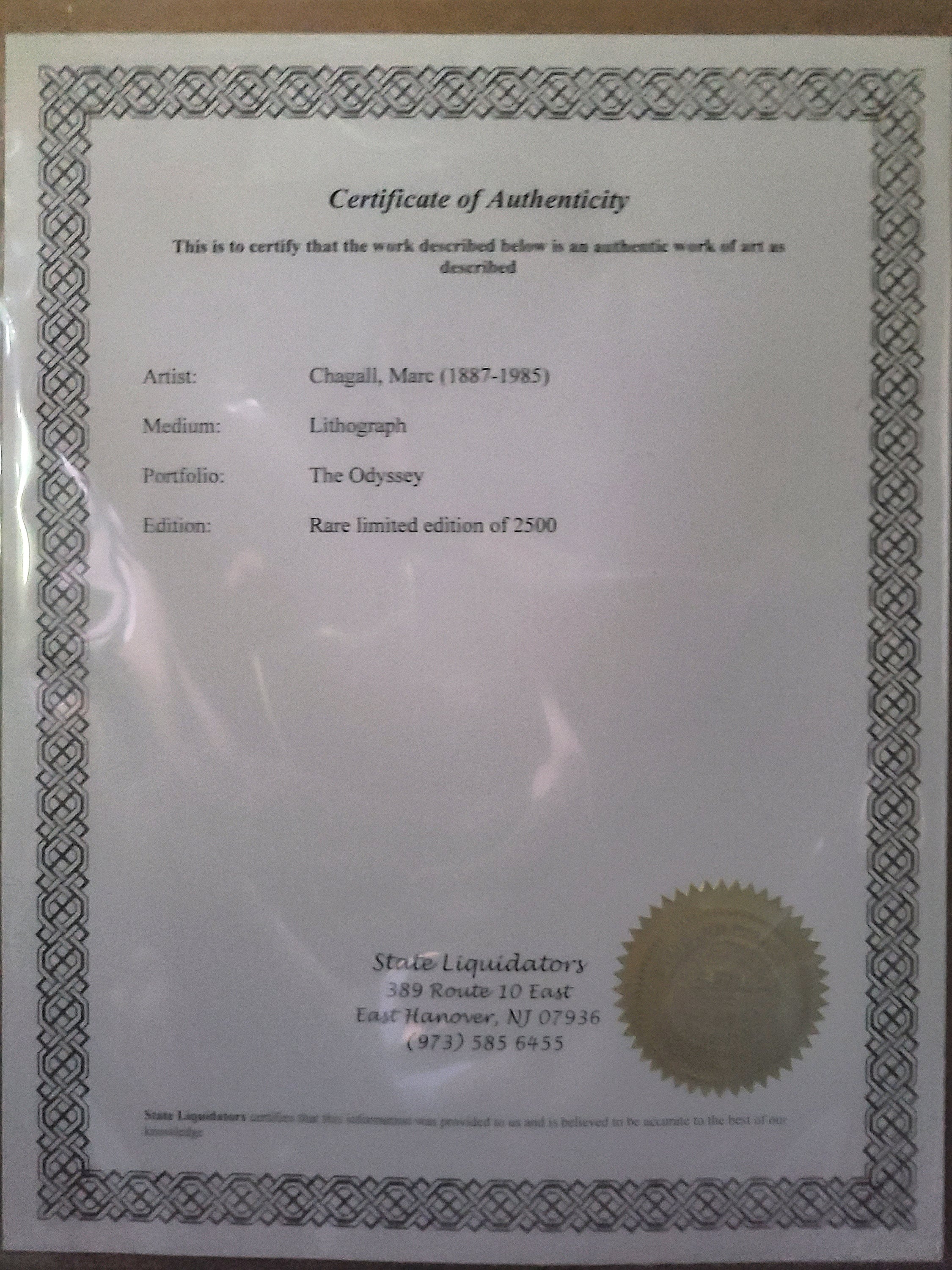 Marc Chagall, Athena and Telemachus,” from L'Odyssée, Authenticated with Certificate

Marc Chagall, Athena and Telemachus,” from L'Odyssée, Authenticated with Certificate

A certificate of authenticity (COA) is a document from an authoritative source that verifies the artwork’s authenticity. While many COAs are signed by the artist, others will be signed by the representing gallery or the printmaker who collaborated with the artist on the work. For secondary market works, authorized estates or foundations are often the issuing party.
COAs typically include the name of the artist, the details (title, date, medium, dimensions) of the work in question, and whenever possible an image of the work.

Artist: Marc Chagall (1897-1985)
Title: “Athena and Telemachus,” from L'Odyssée
Year: 1989
Print Size: 14.75 x 11.75 inches
Frame:
Condition: Excellent
Notes: Published by Daco-Verlag Günter Bläse, Stuttgart from the 1989 folio Die Odyssee with text by Homer and Wolfgang Schadewaldt. After two visits to Greece in 1952 and 1954, Chagall drew much of his inspiration from the mythological motifs dated from Greek Antiquity. It is said of Chagall that he had a Greek view of humanism; the human is only unveiled in divine light while, derived of God, man exists in obscurity and without differentiation. In the tribute he pays to Homers epic poem with the publication of "The Odyssey,” Marc Chagall illustrates precisely the main stages of the text, in a rare delight of fresh and vivid colors.

Chagall captures the atmosphere of the epic through his depictions of the landscape characterized by the sea and Antic Temples, intense sunlight and in his fantastic figures of the Minotaur, Gilgamesh, angels, which act as visible signs of the roles played by the Gods. With their meaningful gestures, the human figures conjure up precisely and tenderly the liveliness of Mediterranean populations.

The Odyessy is the Greek epic poem attributed to Homer, which inspired a series of colorful works by Chagall depicting scenes of this heroic tale. The Odyssey is Homer's epic of its hero Ulysses, and his 10-year struggle to return home after the Trojan War. The extraordinary length of Ulysses' return trip, which should take a matter of weeks, is due to his many antagonists, including the god Poseidon, the many mythical creatures he encounters, and Ulysses' often greedy and lazy crewmen. While Ulysses battles mystical creatures and faces the wrath of the gods, his wife Penelope and his son Telemachus stave off suitors vying for Penelope's hand and Ithaca's throne long enough for Ulysses to return. The Odyssey ends as Ulysses wins a contest to prove his identity, slaughters the suitors, and retakes the throne of Ithaca.


MARC CHAGALL (1897-1985) Russian-Jewish painter is recognized as one of the most significant painters and graphic artists of his time. Chagall painted in a style all his own, combining elements of Expressionism, Symbolism, Cubism and, to a lesser degree, other Modernist art movements. His works combine recollection with folklore and fantasy. A prolific and multi-faceted artist, Chagall left behind him thousands of works in many different techniques and media that have established him as one of the foremost artists of the 20th Century.

Marc Chagall’s dreamlike compositions depict aspects of the artist’s personal and family histories, and those of Eastern European folklore at large. Flying figures, elements of Jewish tradition, peasant life, and animals are frequent motifs. Chagall’s practice—which spanned painting, printmaking, books, ceramics, and stained glass—was immensely influential in the development of 20th-century art: His supernatural subjects and emotional gestures bridged the work of earlier avant-garde movements such as Cubism, Fauvism, and Symbolism with later modernist styles such as Surrealism. Chagall’s career was disrupted by the World Wars, and while the artist moved between Russia, France, and the United States, he managed to exhibit widely during his lifetime both within the continent and in the U.S. His work belongs in the collections of the National Gallery of Art, the Museum of Modern Art, the Tate, the Guggenheim Museum, and the Art Institute of Chicago. Chagall also produced stained-glass windows for Hadassah University Medical Center’s Abbell Synagogue in Jerusalem, the Saint-Étienne Cathedral in Metz, the United Nations building in New York City, and the St. Stephen church in Mainz, Germany.

Please refer to attachments of certification for additional information.

Framed or Print only option ** Shipping and handling, insurance are INCLUDED IN THE PRICE

For questions or concerns, please feel free to message me.

Request a cancellation within: 24 hours of purchase

I don't accept returns or exchanges

But please contact me if you have any problems with your order.